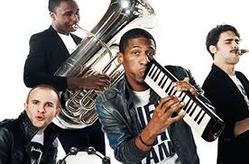 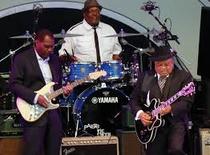 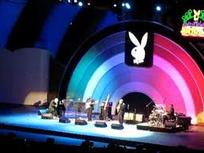 This year’s Playboy Festival, number 38 was the typical mishmash of artists with very animated comedian George Lopez in the role of emcee for the third time. His sometimes over the top antics, along with the different concert offerings kept the roughly 20,000 attendees engaged, while a very small percentage of staunch jazz purists fumed and complained.

The first day of the festival, however was more to the purists’ liking. Keyboardist/arranger/composer John Beasley showcased Monk’estra his large 16-person ensemble bolstered by some of Los Angeles first-call players including Bijon Watson and Brian Swartz-trumpet, Bob Sheppard and Justo Almario-saxophone, with Terreon Gully-drums (not from LA). They showcased icon pianist/composer Thelonious Monk’s adventurous and sometimes off-kilter compositions creatively arranged by the bandleader. Standouts were “Epistrophy,” “Ask Me Now,”  “Evidence” and “Real Jazz” a rap fused original.

13-year old piano prodigy Joey Alexander astonished the audience with talent way beyond his age while working with his trio Ulysses Owens, Jr.-drums and Dan Chimielinski-bass. He shined brightly with assaulting renditions of Coltrane’s A Love Supreme “Resolution” and “Giant Steps” peppered with stride and ragtime touches. A little later he sophisticatedly mixed in gospel and blues for a less energetic, but equally impressive “City Lights.”

Fast-emerging idiosyncratic singer Cecile McLorin Salvant supported by Aaron Diehl-piano, Paul Sikivie-bass and Lawrence Leathers-drums inserted a strong feminine attitude into the male dominated festival roster. Notably, she presented mostly vintage songs from the 1920’s to 1940’s in a modern context with wit and cynicism. Prime examples were 1926 “What’s The Matter Now,” Cole Porter’s “So In Love,” Judy Garland popularized “The Trolley Song,” Leadbelly’s immortal folk song “John Henry” and Irving Berlin’s “Let’s Face the Music and Dance.” Bob  Dorough’s 1966 “I’ve Got Just About Everything” was included as a newer song to thoroughly captivate the audience.

Pushing boundaries a bit with post-bop edginess was classical tinged Bad Plus performing with tenor saxophonist Joshua Redman to reprise their 2015 eponymous recording together. Pianist Ethan Iverson, drummer David King and bassist Reid Anderson served up offbeat cadences and modes in “As This Moment Slips Away” and “Faith Through Error” for the saxophonist to weave in and out of. In many respects this outing was a present day and much more aggressive version of the legendary Modern Jazz Quartet that even briefly echoed Stravinsky’s extremely groundbreaking “Rite of Spring.” They also had a more relaxed identity, especially during Redman’s subtle “The Mending” and King’s “Beauty has it Hard.”

Similar to Beasley’s Monk’estra, Seth MacFarlane with Conductor Joel McNeely had a big band (18-pieces) of top-notch LA players such as Carl Saunders-trumpet, Andy Martin-trombone, Bob Sheppard-saxophone, Chuck Berghofer-bass, Tom Ranier-piano and Peter Erskine-drums. Producer/actor/singer MacFarlane was comparatively very eclectic and offbeat with the song selections. His wit and easygoing manner counterbalanced inane choices “Who’s Keeping Time With The Timekeeper’s Daughter When The Timekeeper’s Out Keeping Time,” “Old MacDonald” and “My Mother The Car!” theme song. Contrarily “Goody Goody,” “Why Should I Cry Over You,” “Huggin’ And Chalkin’” and a swinging version of Simon & Garfunkel’s “Mrs. Robinson” were more appropriate and done with cool verve.

Other first day performers spanned world music, pop, Latin/Cuban and New Orleans funk and soul to rekindle the argument about non-jazz music at a jazz festival. The crowd though, in fact enjoyed these artists just as much or even more than the jazz oriented ones.

Vocalist Aurelio Martinez was clearly in the world music category and with his sextet tastefully played Garifuna music. It interestingly sounded similar to the Spanish/French-Romani oriented Gypsy Kings but was based on the musicians’ Caribbean (Belize, Guatemala, Honduras and Nicaragua) and African heritage. Also representing island culture, specifically from Cuba was Los Van Van. With about 25 players they ignited the stage with powerful Afro-Cuban rhythms and brass to get the audience dancing. Included in their set were Weather Report’s “Birdland,” the Beatles “Hey Jude” and an extended version of “Guantanamera” led by Yenisel Valdes Fuentes the only woman in the gigantic band.

The jolting a cappella crew Naturally 7 who could accurately mimic drums and electric guitar while delivering powerful vocals and harmonies. The crowd-appealing group mostly focused on classic rock hits from the ‘60’s, ‘70s and ’80s intermixed with rap, chants and sweet singing.  Some of the featured songs were Phil Collins “In the Air Tonight,” Seals & Croft’s “Summer Breeze,” The Beatles “While My Guitar Gently Weeps,” Bob Marley’s “The Rivers of Babylon” and “One Love” along with Sting’s “An Englishman in New York.” They also broke up the flow with Herbie Hancock’s jazz-fusion pieces “Butterfly”, “Chameleon” and “Rockit,” along with gospel tinged new ballad “I Will Fix You.”

First day headliners Jon Batiste & Stay Human with special guest Grace Kelly kept the good times going. They started by mixing Suzanne Vega “Tom’s Diner” with New Orleans soulful playing accented by the bandleader’s melodica playing. From there the band jammed around “If You’re Happy and Know it” nursery rhyme and then became more funk oriented, showcasing Eddie Barbash-alto/soprano, Baptiste-synthesizer, Joseph Saylor-drums and Kelly-baritone for solos during a long winded original. Batiste also displayed his “professor” skills on piano with the other band members on various percussion instruments for “New Orleans Blues” while the audience strutted along to the infectious trad rhythms. Similarly themed songs like “Why You got to be Like That” followed and definitely were a fitting end for the first day of the festival.

The second day of the PJF 2016 featured fewer mainstream jazz groups and several of the non-jazz performers proved to be lightning rods that were forces to be reckoned with. Additionally, women made up for their light presence the day before to dominated the stage and fully engage the audience.

Liv Warfield was a throwback to powerful black women singers rocking out, such as Tina Turner, Merry Clayton, Grace Jones, Sharon Jones and Sister Rosetta Tharpe. Fronting a seven-piece band she wailed with raw energy for classic rocking “The More Things Change the More They Stay the Same” and raucous “Loving You Makes Me Crazy” with a sensuous solos from her brass players. For a respite she dramatically rendered “Don’t Say Much” that was truly electrifying. She, though, still had more energy in her tank and vigorously jammed on “Them Changes” featuring her guitarist waling away and original “Why do You Lie?” to bring down the house.

A little harder to put a finger on was Janelle Monáe who energetically juggled pop, fantasy, rock and R&B. More than anything she constantly moved around the stage and just on the merits of her energy the crowd was impressed. She, though, had solid singing and dancing skills that really came to the forefront during tributes to Prince and Michael Jackson to blow the audience away.

Sheila E was part of her father, Pete Escovedo’s Orchestra that included great players like Justo Almaria-saxophone, Joe Rotundi-keyboards and Roy Obiedo-guitar. The band opened with her brothers Peter Michael-drums and Juan-percussion jamming away. Upon the arrival of Sheila the show eventually became hers after competitive segments with her brothers as the senior Escovedo coolly observed. The bandleader also had his moments, singing and soloing on timbales for Latin jazz classics and originals. But when his daughter took flight the show shifted to funk, especially songs she recorded with Prince and her hit  “Whatcha Gonna Do?“ closed the set and festival.

Upon first glance earlier act Javon Jackon and Sax Appeal seemed like it would be all saxophones and maybe a backing trio. But in actuality the group was comprised of Jackson and 89-year old NEA Master Jimmy Heath on reeds admirably supported by George Cables-piano, Wille Jones III-drums and David Williams-bass. They shot out of the gate doing Charlie Parker’s bebop classic “Confirmation” and soloing extensively, including Cables and Jones. Later Health on soprano was showcased for his jazz-waltz-like original “Day Dream” that delighted the audience. He reunited with Jackson barnstorming on an upbeat hard-bop number and his soulful urban themed original “There’s a Time and a Place” to conclude one of PBJ 2016’s best jazz sets.

Continuing the vibe with a twist was Big Chief Donald Harrison Jr. and Congo Nation Cultural Group sextet. The saxophonist/vocalist/percussionist launched into a fiery jam with his band that left one wondering what he would do to top that. Uniquely, he took the audience on a cultural voyage, mixing mainstream Ellington and funky James Brown, including “Take the A’ Train” and Scott Joplin’s trad classic  “Maple Leaf Rag.” Harrison turned to smooth jazz soulfully singing, “Ain’t no Party Like a New Orleans Party” and grooving with his band. He played soprano on other tunes as well to get the crowd dancing. His guitarist Detroit Brooks serenaded the ladies singing “Feel Like Making Love.” Additionally, a troupe of female dancers and some Mardi Gras Indians joined the band as the bandleader sang gem “Iko Iko” to convey a strong New Orleans feeling with the Lopez and audience dancing along and waving handkerchiefs.

For a change of pace blues was served up via Robert Cray’s Celebrating B.B. King set. With sidemen Richard Cousins-bass, Les Falconer-bass, Dover Weinberg-keyboards, Steve Madalo-trumpet and Trevor Lawrence-saxophone the guitarist/singer honored the undisputed King of the Blues who passed away last year. Standouts from the blues legend’s catalog done by the tribute band were “3 O’clock In The Morning” and “Rock Me Baby” with Cray singing like King as the brass players soloed. Guest slide guitar master Sonny Landreth revved up the audience with “I’ve Got A Mind To Ramble” and an exciting version of “Woke Up This Morning.” However, the other guest guitarist Roy Gaines surprised everyone by stealing the show. He did King classics “How Blue Can You Get” waling away holding his guitar over his head and a swinging blues version of “Everyday I Have The Blues” that had the crowd roaring.

Fourplay made up of top notch players Bob James-keyboards, Nathan East-bass/vocals, Chuck Loeb-guitar and Harvey Mason-drums were in the “quiet storm”/smooth jazz-like camp and celebrated 25 years together. New CD Silver noted the milestone with “Horace” honoring Horace Silver and “Quicksilver” being showcased from it. But as expected their popular tunes such as “Gentle Giant,” “101 Westbound” (dedicated to the Ventura Freeway),  “Third Degree” and “Westchester Ladies” generated the most response from the audience to bring out the best performances from the musicians.

One of the opening sets for the second day was emerging trumpeter Christian Scott, aka Atunde Adjua. He worked with Lawrence Fields-keyboards, Joshua Crumbly-bass, Coeey Fonville-drums, Braxton Cook-alto saxophone and Elena Pinderhughes-flute/vocals. They went on an exploratory voyage that melded fusion, world, avant-garde and post bop styles bolstered by outstanding solos. Prior to Scott, English singer/pianist Anthony Strong performed with the CSUN Jazz A Band, Directed by Matt Harris who got the festival underway beforehand. They rendered harmonically complex numbers such as “Audacity” and “I Thought About You.” With Strong things turned lighter and a bit showy for “Whatever Lola Wants,” “Luck Be A Lady,” “The Gambling Man’s Blues” and a lively version of “Cheek To Cheek.” 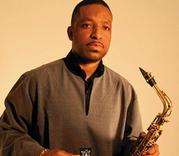