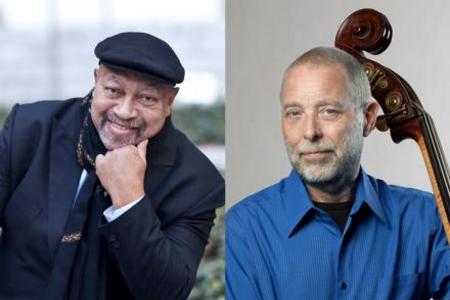 The 2019 Monterey Jazz Festival, number 62 departed somewhat from its conventional orientation of overflowing with a plethora of well-known legends and giants of jazz, to a balanced program that provided more opportunities for emerging, lesser-known and female artists. Although, some were not happy about the festival’s direction, it was unquestionably necessary for growth and vitality, and analogous to trimming a tree periodically. Reflecting MJF’s forward-thinking openness was the co-appointment of bassist Derrick Hodge and drummer Allison Miller as Artist-In-Residence, bassist/band leader Christian McBride as the Showcase & Commission Artist, and pianist Kenny Baron as the Jazz Legend Artist. Each of the musicians buzzed about the Monterey County Fairgrounds for sets on different stages and in numerous configurations.
On the Jimmy Lyon’s main stage Hodge and Miller presented Soul On Soul: Tribute To Mary Lou Williams. Included in their combo were pianists Shamie Royston and Carmen Staaf, along with vocalists Jean Baylor, Johnaye Kendrick and Michael Mayo. Together they produced a lush tapestry of driving band interaction and harmonious singing spanning Williams’ jazz compositions and spirituals. “Anima Christi” from her Black Christ of The Andes combined both worlds and thoroughly captivated the audience to close the set. Miller additionally took part in the discussion Remembering Mary Lou Williams with the other women in the band and Moderator Pamela Espeland in The Blue Note at Sea tent, performed with her group Boom Tic Boom in The Night Club, The Next Generation Orchestra with Hodge on The Lyon’s Stage, and Parlor Social with violinist Jenny Scheinman at Dizzy’s Den. Hodge also performed with his quartet, and fusion band Color of Noize at Dizzy’s Den, and along with giving a master class.

McBride was equally busy, performing with his big band twice, including premiering his Commission Roy Anthony: The Fearless One In Memory of Roy Hargrove. The 16-minute piece with Kanoa Mendenhall playing the bass, and the bandleader conducting was sophisticated and incorporated high-level swinging and big band forays, with levels of intelligent brass integration. Also included was a subdued ballad section bolstered by trumpet and flute solos, along with a rolling funk segment to wow the crowd. Alternately, the bassist got funky with his Christian McBride Situation that featured Patrice Rushen-keyboards, Alyson Williams-vocals, Keith Loftis-tenor saxophone, with DJs Logic and Jahi Sundance.

Baron’s schedule at MJF 2019 was a little more relaxed and included performances on the Lyon’s Stage and Pacific Jazz Café with bassist Dave Holland and Nasheet Waits-drums. On the main stage the trio swung coolly and intelligently with rhythmic variations that provided plenty of space for impressive solos during Monk’s “Worry Later/San Francisco Holiday,” pianist Sumi Tonooka’s  “Secret Places,” who is from Philadelphia like Baron and his original “Seascapes.” Additionally, Baron and Holland were honored at the 13th Annual Jazz Legends Gala at the Tehama Golf Club in Carmel prior to MJF 2019, and they took part in the MJF Conversation Series hosted by journalist Willard Jenkins.

Among the many other interesting and great shows at MJF 2019 was festival favorite Diana Krall and her quintet on the main stage. It consisted of John Clayton-bass, Joe Lovano-tenor sax, Anthony Wilson-guitar and Karriem Riggins-drums. The singer/pianist bandleader rendered a flowing set of standards such as jaunting “Do I Love You,” evocative “All or Nothing at All” with a bowing bass intro and extensive guitar, sax and piano solos. While “Love is All I Can Give You” was laden with piano, and an upbeat and solo drenched treatment of Bob Dorough’s “Devil May Care” totally captivated the audience.               In the Pacific Café singer Roberta Gambarini and pianist Jeb Patton dedicated their set to recently departed trumpeter and Gambarini’s friend Roy Hargrove. It included Rahsaan Roland Kirk’s hip swinging “Theme For The Eulipions,” lengthy “The Maestro” by Cedar Walton and Dave Brubeck’s stately “The Duke.” Also in the same venue pianist/singer Tammy L. Hall and bassist Ruth Davies “re-imagined” Charlie Haden and Hank Jones’ gospel-jazz work together from their albums Steal Away and Going Home. Among the songs the duo performed were “Leaning on The Everlasting Arms” and “Down by The Riverside” with the audience clapping along. Additionally, saxophonist Kristen Strom joined the duo for Ellington’s “Come Sunday” and “Nobody Knows The Trouble I’ve Seen” by Charles Brown.

Bria Skonberg, an emerging singer/trumpeter from Canada and a member of the Monterey Jazz Festival on Tour band provided an energetic set at the Night Club stage. She showcased selections from her latest CD Nothing Never Happens, such as modern hard-jamming “I Want to Break Free,” and New Orleans trad styled dirge “So is The Day” garnished by the bandleader’s sullen singing and hot trumpet playing to thoroughly captivate the audience. Pamela Rose-vocals & Terrence Brewer-guitar in the style of popular Bay Area husband and wife duo Tuck & Patti were contrastingly subtle and celebrated the legendary work of Ella Fitzgerald and Joe Pass together on the Dizzy’s Den stage. Combining enchanting singing and zesty guitar playing, they tastefully rendered classics like “You Turned The Tables on Me” and “Ev’ry Time We Say Goodbye,” along with Stevie Wonder’s “You Are The Sunshine of My Life” featuring saxophonist Strom.

In the vein of Brazilian and Latin jazz, MJF presented Eliane Elias, the Pacific Mambo Orchestra and Natalie Cressman & Ian Facquini, among others. Singer/pianist Elias debuted at the festival on its main stage with her quartet made up of Marc Johnson-bass, Rafael Barata-drums and Rubens de La Corte-guitar. The unit spryly jammed together initially for a bossa instrumental and continued playing songs from Elias’ 2016 Grammy and 2017 Latin Grammy-winning CD Made in Brazil and recent Love Stories. Standout numbers were “Aquarela do Brasil,” "Você," unofficial anthem “Isto Aqui O Que É (Silver Sandal)” embellished with her and drums trading off, and sultry sang ballad “Simplest Things” that she also augmented with a dazzling piano solo.

Also on the Lyon’s stage were the Grammy-winning 20-piece Bay Area-based Pacific Mambo Orchestra who provided variety and diversity in the mid-afternoon sun. Singers Christelle Durandy and Armando Cordoba fronted the ensemble, which energized the audience with an engaging mix of salsa, mambo, cha cha cha and Latin jazz in the tradition of Tito Puentes, Tito Rodriguez and Machito. From a more subdued perspective, Natalie Cressman-trombone/vocals and Ian Facquini-guitar/vocals performed on the Dizzy’s Den stage for a melodious set of mostly samba and choro originals from their CD Setting Rays of Summer. The title track and the Beatles’ “She’s Leaving Home” were sweetly sung in English and gentle folk, while “Terê” in Portuguese and a Guinga piece were samba/chore tinged, and showcased the duo’s astounding instrumental prowess.

Contemporary jazz was strongly represented at MJF 2019 through Marcus Miller, Bob James and David Sanborn, Snarky Puppy and Chris Botti. On the Lyon’s stage bassist Miller, keyboardist James and alto saxophonist Sanborn, with Billy Kilson-drums rekindled the 1986 top-selling album Double Vision. Among its popular tunes played were “More Than Friends,” new agey “Moon Tune” that James joked was “old age music.” Also in the set was Ray Charles’ “You Don’t Know Me” featuring Temptations soulful singer Larry Braggs, who also sang “Since I Fell For You” in honor of Al Jarreau (sang it on DV) and Grover Washington’s “Mr. Magic” (originally arranged by James). Snarky Puppy on the same stage maintained their Brooklyn edge with lengthy pieces full of improvisation and a closer featuring the crowd who were surprisingly into it, clapping along in three different groups and beats. Botti on trumpet led a more scale down group than normal and leaned more to standards with pop and classical mixed. Propelling it all were singers Sy Smith, and strong up and comer Veronica Swift.

The Yellowjackets consisting of Bob Mintzer-tenor sax, Will Kennedy-drums, Russell Ferrante-keyboards and Dane Alderson-bass with Luciana Sousa singing at The Night Club put on a fusion clinic that was a bust out jam session. All the players blazed away and were strongly accented by Kennedy. Sousa additionally provided sensual and emotional moments for respites and assortment.

Funk, R&B and pop were injected into MJF 2019 as well. Cha Wa who performed on the Lyon’s and Garden Stages were strongly linked to New Orleans’ Mardi Gras Indian traditions. Fronting the group were vocalist/percussionists J’Wan Boudreaux and Joseph Hills who donned elaborate Indian costumes. Their octet performed funky and soulful grooves from their Grammy-nominated CD Skyboy. Tank And The Bangas, led by singer Tarriona “Tank” Ball were also from New Orleans and represented its street culture. On-stage they resembled a co-ed version of the Village People and kept things interesting by melding pop, modern soul, gospel and fusion.

Veteran Dutch saxophonist/vocalist Candy Dulfer also made her MJF debut on the main stage with her septet and charmed the audience, while also exhibiting strong influences of her long association with Prince. She mostly showcased songs from her new project Together, along with some venerable hits. Among them were “Out of Time” dedicated to Prince, jazz and Caribbean flavored “What U Do (When the Music Hits),” Santana/Gato Barbieri’s “Europa (Earth's Cry Heaven's Smile)” also strongly adorned by guitarist Ulco Bed and the Average White Band’s enduring hit “Pickup The Pieces.”

A longtime MJF Saturday afternoon tradition is blues, and this year two performers, Christone “Kingfish” Ingram and Larkin Poe totally captivated audiences, and were very different. 20 year-old Ingram, a protégé of Blues King Buddy Guy, played with his power trio that included Paul Rogers-bass and Chris Black-drums. He jammed away and sang on the Garden Stage and was spellbinding, reminiscent of Eric Clapton, Stevie Ray Vaughan and his mentor. He injected New Orleans stable “When The Saints Come Marching In,” R&B/blues classic “Hey Joe” and “I’ve Got to Run” as an encore into his set. Larkin Poe who are guitarist/singer sisters Rebecca-28 and Megan-30 Lowell, raised outside of Atlanta and now based in Nashville, derived their name from their great, great, great, great grandfather Larkin Poe, a distant cousin of Edgar Allen Poe. Dubbed “the little sisters of the Allman Brothers,” the women supported by Brent Layman-keyboards/bass and Kevin McGowan-drums spotlighted songs from their 2018 recording Venon & Faith. Its a rocking mix of roots and blues with fiery guitar, slide guitar and stirring singing that blew the audience away.

Undoubtedly, there many, many other artists appearing at MJF 2019, along with ancillary activities such as the infamous Blindfold Test, interviews, film screenings, symposiums and presentations. An amazing food court and North Coast Brewery's offerings are popular for those attending the festival, as expected. For more info and ticket purchases for 2020 go to: www.montereyjazzfestival.org.