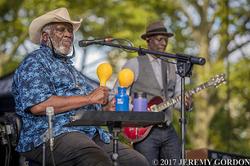 Los Angeles’ Playboy Jazz Festival, the event’s 39th edition had one of the strongest lineups in recent years that was affirmed by strong crowd reactions.

Celebrating Bobby Hutcherson was a tribute to the vibraphone legend and coordinated by Stefon Harris, protégé of the vibraphone/marimba icon who passed away August 15, 2016. Embellishing the program were three other vibe players—veteran Warren Wolf, still in college Joel Ross and legend Roy Ayers, whom Harris dubbed “The Godfather of Neo Soul.” Superbly supporting them in varying configurations were Patrice Rushen on piano, Eric Harlin on drums and Joshua Crumbly playing bass. Harris, the Musical Director, Wolf and Ayers aligned for a spirited rendering of “Highway One” that even had emcee George Lopez approvingly howling. Harris briefly stepped away as Ross joined the other vibraphonists for “Little B's Poem” and then returned for the finale “Roses Poses” with everyone, including the backing band all soloing profoundly.

Much anticipated Hudson comprised of veterans bassist Larry Grenadier, guitarist John Scofield, keyboardist John Medeski and drummer Jack DeJohnette pushed the envelope with an eclectic selection of tunes. They began with a wigged out version of Jimi Hendrix’s “Wait Until Tomorrow” featuring Scofield and Medeski psychedelically stretching out and continued with their Miles Davis Bitches Brew inspired euphonious title track. The explosive quartet balanced things with accessible and appealing takes on Joni Mitchell’s “Woodstock” and the Band’s (Robbie Robertson) “Up on Cripple Creek.”

from his latest recording Take Me to the Alley including the altruistic title track.

However, as expected his well-broken in songs “Musical Genocide,”

“Papa was a Rolling Stone” were what really enthralled the audience.

Somewhat related to Sandoval was the 25-year-old all-woman big band DIVA. They roared with hard swinging originals, along with “Love Being Here With You,” Jobim’s bossa classic “Felicidade” and “Pennies From Heaven” to showcase various members of the band. Deceased band founder, drummer and former Buddy Rich manager Stanley Kay’s “Did You do That” spotlighted sax players Roxy Coss and Janelle Reichman, and “Get Me To The Church On Time” was highlighted by leader/drummer Sherrie Maricle’s explosive solo.

Rekindling the spirit of hard bop was drummer Carl Allen and the Art of Elvin Quintet that was a tribute to his drumming mentors Elvin Jones and Art Blakely. With Freddie Hendrix on trumpet, Yasushi Nakamura on bass, Donald Vega playing piano and Keith Loftis on reeds they came out the gate blazing with Wayne Shorter’s “One By One” composed while he was in Blakey’s quintet. Alternately, Allen’s “Jones For Jones” written the day the legend died was somber, solo laden and cool swinging.

For something a little different saxophonist Kenny Garrett’s Quintet combined

forces with the nine-member JazzAntiqua Dance Ensemble for a captivating

display of movement to a jaunting soul jazz backdrop. Included was the bandleader

chanting and singing “Do Your Dance” and doing the same for “Happy People.”

TajMo’: The Taj Mahal and Keb Mo’ Band firmly established that blues is very much alive and well, and might even steal your spouse. Fueled by horns, backup singers and a ripping rhythm section the rascally duo led off with Mahal’s cover of Horace Silver’s “Senor Blues” to get the party started. They ventured into hard-driving contemporary blues with new tunes “Don’t Leave Me Here,” an acoustic treatment of John Estes classic

“Diving Duck Blues” and world music oriented “Soul.” Not to be forgotten

“Leaving Trunk” and “She Caught The Katy,” along with Mo’s funky

included bass, accordion and violin honored French guitar legend Django Reinhardt (1910-1953). “Tea For Two” and classic “Minor Swing” that was strongly received by the audience highlighted his signature “hot jazz” selections and collaborations with fellow legend, violinist Stephane Grappelli. Somewhat related was Brazilian Hamilton de Hollanda’s Trio featuring him playing a ten-string mandolin with Vitor Concalves-piano/accordion and Or Bareket-bass. They injected an interesting feel to the festival with a slight resemblance to Bay Area-based David Grisman through pieces “Cows in Harmony.” piano laden “Samba Blues” and driving classical based compositions.

In a category all by himself, 22 year-old Jacob Collier, a modern day one man band who probably would also be well received at big rock festivals such as Coachella, Lollapalooza and Bonnaroo rocked the house. He adventurously employed Take 6-like vocal choruses, samples of him playing piano, bass, drums and percussion through a MIT designed harmonizer with 3-D video capture loops displayed for Stevie Wonder and Gershwin covers. To keep himself honest he played only acoustic piano while singing Wonder’s “You and Me.”

Vintage funk and R&B was served up by The California Honeydrops quintet led by charismatic singer-guitarist-trumpeter Lech Wierzynski. Although an early performing band, they had the audience party to Bay Area, Southern and New Orleans styled songs.

“Papa Was a Rolling Stone” strongly accented by Alex Han-sax and Marquis Hill-Trumpet.

recently departed singer Al Jarreau through his pop hits “I Will Be Here for You,” “We’re

in This Love Together” and “So Good.” For added flavor Miller mashed “Da Butt” and

Jarreau’s “Roof Garden,” pushing it until he got the  infamous stage spinning treatment

for going over his allotted time.

Miller in effect set the bar for the next day’s funk and pop groups: Miles Mosley and West Coast Get Down, Corey Henry and The Funk Apostles and Common. Fast emerging bassist/vocalist Mosley led his mighty ensemble with high energy, soulful originals “Young Lion,” “Abraham.” ballad “More Than This,” and “Shadow of Doubt” mashed with a high flying version of the “Theme From 2001 a Space Odyssey” and the band soloing all from his new CD, Uprising. Organist Henry known for his work with Snarky Puppy took pages straight from Prince’s and Sly and the Family Stone’s playbooks with rocking funk for “Life is Just a Game” and “Just to Be With You.”

Common the only rapper/hip-hopper on the lineup, who is both socially and

politically conscious, made his Playboy Festival debut and was the last day headliner.

to the wine and cheese-crowd. They were assaulted with urban themes straight

from the headlines including powerful “Black Maybe” and “Get Em’ Up.” Common

Maimouna Youssef and keyboardist Junius Bervine, a ballad sung sexily to a young

from the movie Selma, originally recorded with John Legend its creator.

Notably, the festival wasn’t just about artists intensely pushing the envelope. English vocalist Corinne Bailey Rae added soft and soulful dimensions to the party. She angelically and sexily sang “Closer,” Curtis Mayfield’s “Do You Ever Think of Me” and ballad “Like a Star.” Diva vocalist Lalah Hathaway presented silky well produced soul grooves with a large entourage to caress the audience. Standouts were “If You Want to,” “I Can’t Wait,” “Shine,” and “Don’t Give Up” along “old school” songs “Angel,” “Would You Mine,” “Forever, For Always, For Love” with audience singing along and “Something” featuring her scatting.