From early days of the Chumash Indians after the influx of the Franciscans and Spanish missions and presidios, Santa Barbara’s architecture had become a fusion of Mediterranean, Spanish, early Californian, Mexican, Moorish and English Country design. Many architects would make an imprint on Santa Barbara, leaving a rich legacy of multiple cultural design throughout the county. Low-pitched red tile roofs, porcelain plaster walls, cloistered arched facades with enclosed gardens and courtyards reveal wrought iron embellishments with bougainvillea and common threads that link its history. Today, Santa Barbara fuses romantic design elements more than anywhere else in the country. 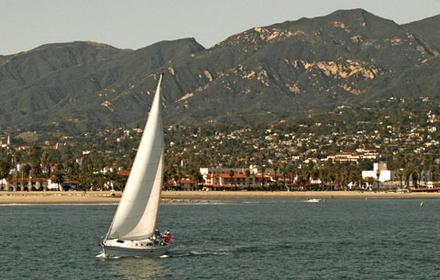 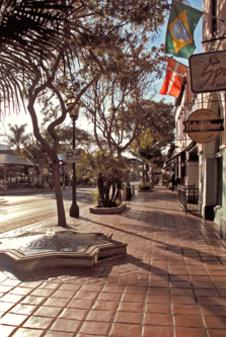 SPANISH COLONIAL ADOBES
The largest of the El Presidio buildings, The Presidio Chapel (1788), was reconstructed on its original foundations and contains 18th century-era deacon, including the padres’ and commandants’ quarters with authentically reproduced furniture.  A 15-minute slide show and scale model of the El Presidio also gives visitors a fascinating impression of life in Old Spanish California. Located across the street from the Presidio Chapel is Santa Barbara’s oldest adobe El Cuartel (1788) the former residence of Jose Jesus Valenzuela, gatekeeper of the fort during the Mexican period.

El Presidio De Santa Barbara
One of best examples of original Spanish Colonial adobe-style architecture is seen in structures that are part of the El Presidio De Santa Barbara Historic Park (1782), part of the last military outpost in California. Considered one of the most coveted remnants of Santa Barbara’s Spanish-Mexican heritage, Casa de la Guerra (1819-27), a u-shaped adobe built by Jose de la Guerra, ranks among the city’s most famous architectural landmarks. In 1923, Casa de la Guerra was remodeled and became a traditional gathering place for festival art activities. Today, it is a historic house museum reflecting the period of 1828 - 1858 when Don Jose de la Guerra resided in the casa. Other prominent homes in this style: the Hill-Carrillo Adobe (1825-26) at 11 East Carrillo Street, Lugo Adobe (1830) at 114 East De La Guerra Street and Rochin Adobe (1856) at 820 Santa Barbara Street.

THE GRECO-ROMAN INFLUENCE
Among the most visited landmarks is Mission Santa Barbara,  founded in 1786 by the Franciscans. It's known as “Queen of the Missions, designed by architect Antonio Ripoll.  This masterpiece showcases the best of Greco-Roman architecture with columns and statuary on top of the cornice. The Mission’s famed Roman sandstone facade is based on a plate in the Spanish edition of Vitruvius’ books and highlights dual bell towers the only California mission to have twin towers. The grand edifice stands on an elevated plateau that commands a view to the ocean, framed by the Riviera and mesa areas. Visitors can attend mass on Sundays and take a self- or docent-led tour through the Mission museum, lush gardens, courtyards, chapel and cemetery where 4,000 Chumash Indians are buried.

A MASTERPIECE IN MISSION REVIVAL
The distinction of Santa Barbara's Spanish architecture offers a blend of century-old renowned mission churches and luscious tropical horticulture. Out of these ingredients evolved one of America’s first major regional architectural styles Mission Revival. Since the early 1890s, Mission Revival has drawn upon the California missions for stylistic inspiration.

One of the foremost architects of this style was Arthur Page Brown.  His residential works, five Crocker Row (1894-95) homes on Garden Street, highlight such design elements as ornate scalloped window detailing and pointed arched windows. One of the best-known features of Crocker Row is a 300-pound metal dog named Rover that stands guard at 2010 Garden Street. Another great architect of this design style was Francis W. Wilson.  Wilson’s Southern Pacific Railroad Depot (1905), now the Amtrak station, is one of Santa Barbara’s few remaining structures in this style, located next to the historic Moreton Bay Fig Tree the nation’s largest on Chapala Street.

SPANISH COLONIAL REVIVAL
Many of Santa Barbara’s public and private structures were designed in the Spanish Colonial Revival style prior to the 1925 earthquake.  Key examples include the Santa Barbara News-Press building, City Hall, El Paseo, Montecito Country Club and the Santa Barbara Cemetery Chapel. Following the earthquake, Spanish Revival became the predominant style of architecture and the majority of the city’s commercial downtown area is rebuilt with this design in mind. The most important 20th century building in Santa Barbara, second only to the Mission Santa Barbara in overall architectural significance, is the Spanish-Moorish Santa Barbara County Courthouse (1927-29), designed by architect William Moser.

The ornate edifice is considered one of the most impressive Spanish Colonial Revival designs in the United States. The Roman triumphal arch, its most dramatic feature, provides a view of Santa Barbara foothills and leads to the central courtyard and sunken gardens. Other decorative features include the sandstone entrance, theatrical tiled staircases, ornate sculpture and open loggia corridors. Don’t miss the Mural Room on the second floor which houses a stunning life size mural of the history of Santa Barbara by Dan Sayre Grosbeck, scenic designer for Cecil B. De Mille, and the 85 ft. clock tower with panoramic views of the city.

Santa Barbara Courthouse & Santa Barbara Presidio
Another testimony to Revival design and one that exudes the spirit and charm of an old world plaza is the famed El Paseo (1922-24), originally designed by architects James Osborne Craig and then Mary Craig.  Visitors will delight in this charming complex where they can relax in the famed “Street in Spain” courtyard and quaint passageways, all of which partially encompass the historic De La Guerra Adobe.  El Paseo became the first major step taken in converting Santa Barbara’s architecture from Anglo Main Street to Hispanic Pueblo.

Other classic examples of Spanish Colonial Revival architecture can be seen in the design of two landmarks by architect Reginald Johnson. One is the United States Post Office (1936-37), which looks more like a palace than a government building, with decorative motifs derived from the popular Moderne style. The other, which typifies the acme of Santa Barbara’s gracious living, is the aristocratic Four Seasons Biltmore Resort. Credited as being one of the most distinctive buildings in Santa Barbara, the Arlington Center for the Performing Arts (1930-31) is clearly a great monument of Spanish Colonial Revival architecture. One forerunner of this style was architect James Pluckett who, in the late 1920s, was commissioned to design a grand-style theater. The Arlington’s ornate detailing includes a magnificent spire towering above the city, a gracefully arched loggia, a mock Spanish village sketched along the interior walls and an elliptically vaulted “star-studded” ceiling that creates an illusory night sky.

No other Santa Barbara architect worked in the Spanish Colonial style more than architect George Washington Smith.  Even today, his name is synonymous with this architectural style, making the city one of the most beautiful and unique in the country.  Smith was primarily known for his residential designs, but also designed the oldest continuously operating theater in California:  The Lobero Theatre (1924) on Canon Perdido Street.  Along with architect Lutah Riggs, the duo created a graceful three-tiered cultural design using bricks from the original opera house for the adobe walls featuring a 70-foot high stagehouse.  Smith is also credited with designing the Andalusian style Casa del Herrero (1925), an 11-acre estate in Montecito.  This home has been preserved as a living museum for the display of architecture, decorative arts and an elaborate Moorish garden.  Its treasures include colorful Mediterranean tile, Spanish doors and window shutters, corbels and a ceiling from a 15th century convent.  A vast array of tools and silversmithing devices can be seen in the 1,000-square foot workshop adjacent to the home.  Reservations required.

Another outstanding Santa Barbara landmark is Casa Dorinda (1919). In 1916, Henry W.H. Bliss and wife Anna Dorinda Blaksley purchased 48 acres for their future residence and commissioned architect Carlton Winslow to design a Spanish Colonial style home, and one of the largest mansions in Montecito was born. Today, it is a retirement community; private tours are available.

VINTAGE VICTORIAN TO CALIFORNIA CRAFTSMAN
Santa Barbara is long known for its creative mix of bed and breakfast properties 15 in all that run the gamut from vintage Italianate to California Craftsman. Victorian architecture was also a popular style throughout the 19th century in Santa Barbara.  Great stops include the The Cheshire Cat Inn, which boasts two 1894 Victorian structures, the Simpson House Inn (1874), which sports an Italianate Victorian design and the Italianate The Upham Hotel (1871-71), built for banker Amasa Lyman Lincoln.  The stately two-story property is a clapboard structure with a horizontal roofline and design elements reminiscent of New England, including carved cornice pieces, brackets and cupolas.

Though Santa Barbara is a blend of many architectural styles, visitors and residents alike identify it with the cool broad patios, thick adobe walls and trademark fiery tiled roofs and floors. These attributes distinguish Santa Barbara as one of America’s great architectural cities.

for Sun, Surf, and Sail