Route 66 Tour
The Mother Road
Route 66 is often called The Mother Road," "The Main Street of America," or "The Will Rogers Highway," took in as much existing road as possible when it was commissioned in 1926. Originating in Chicago, it traveled west to LA often a lyrical phrase recited from the famous namesale song, ending eventually in Santa Monica near the Pacific Ocean. The full road trip spanned eight states, from Chicago, Illinois; through Missouri, Kansas, Oklahoma, Texas, New Mexico, Arizona to the Golden State of California!

Coming to this mythical land became easier with the advent of U.S. Highway Route 66, the first direct route from the Dust Bowl region all the way to an area just south of California’s Central Valley, the heart of California’s rich agricultural bounty.
While many migrants came to California, the majority did not stay permanently since the Golden State didn’t offer the better life they were seeking. At best, they could only find seasonal, low-paying agricultural jobs that required travel up and down the state following harvest seasons.
But some of what attracted people to California was real, it was here and it was found along Route 66 as they made their way across the state. The hardships faced by the dust bowlers doesn’t tell the whole story of Route 66 and farming because it doesn’t fully reflect the story of California agriculture. These are stories like the profound influence that California’s citrus industry exerted on American agriculture and the thousands of acres of vineyards that thrived in southern California through the mid twentieth century.
California’s portion of Route 66 extended from the Colorado River near Needles, to the Pacific Ocean at Santa Monica, representing some 320 miles, and reflecting the diversity of California’s agricultural industry along the way.  For those who traveled along the “Mother Road,” once they crossed the state line into California and made it past the desert, they were greeted by rolling green hills and green pastures, fruit orchards, wineries, livestock ranches, and dairies. All living landscapes that seemed to prove that everything they had heard about California was true.
Ironically, agriculture along Route 66 faced the same fate as most of the dust bowlers. In the 1940s, as society changed from being predominantly agricultural-industrial to an urban-technological society, urban displacement of agriculture became dominant in southern California as super highways and suburbs were built. 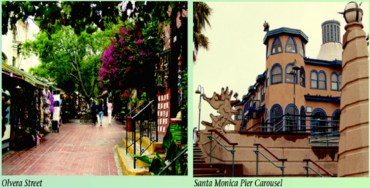 Route 66 has long been associated with agriculture and farming, due largely to John Steinbeck’s famous novel, The Grapes of Wrath, which portrayed the westward migration of people fleeing the dust bowl and depression in the 1930s in search of a better life.
Steinbeck’s fictional Joad family represented the thousands of farm families that left a barren land with the dream of starting over in the only life they had ever known: farming. For those who made farming their life, California represented the “promised land” that seemed to offer an abundance of work because its ideal climate provided a longer growing season and diversity of crops, all needing to be harvested. 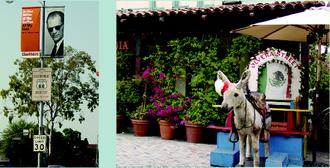 That encompasses 3 time zones and 2448 miles, if you are counting. "At birth" only 800 miles of Route 66 was paved road. Most people travel from Chicago west, because most of the literature only goes that way. It was the consummate American vacation road to see the country. "Route 66" was a symbol of Americana, the classic drive with vintage roadside attractions, from unpretentious diners and motor courts to natural treasures and high rent districts. It traversed through the land of the Painted Desert, the Petrifi ed Forest, the Grand Canyon and the Mojave Desert. On its edge, wigwams, presidential homes, pueblos and old western towns. Route 66 was memorialized by John Steinbeck, Will Rogers, and songwriter Bobby Troup in his "(Get your kicks on) Route 66."

The 1960s "Route 66" television show starring Martin Milner and George Maharis, tempted Just a blink away from the "Historic Route 66" sign in Downtown LA, is a destination worth visiting- the Plaza and Olvera Street. A part of El Pueblo of Los Angeles Historic Monument, it is near the site where Los Pobladores founded the city in 1781. This oldest and most historic section of Los Angeles reflects its diverse ethnic heritage under three governments. The Visitors Center located in the old Sepulveda House can direct you to some of the 27 historic buildings including the Avila Adobe, Pelanconi House, Pico House, Italian Hall, Firehouse, Plaza Church, Merced Theatre and Masonic Hall. Route 66 picks up Santa Monica Boulevard through West Hollywood with more upscale trendy restaurants than diners, and passes through Beverly Hills with its manicured park space bordering neighborhoods of the rich and famous. If you look closely, all to take an adventurous drive and see the country….even if we didn't own a Corvette! In California, you can explore Route 66 by traveling through Needles, Barstow, Victorville, Cajon Summit, San Bernardino, Rancho Cucamonga, Azusa, Pasadena, South Pasadena, Los Angeles, West Hollywood, Beverly Hills, West Los Angeles to Santa Monica. Route 66 was officially decommissioned in 1985, so maps and "Historic Route 66" signage will help point the way. The highway has been "re-routed" some, so you may choose to stay on the interstates or veer off to the original rustic highway.

The End of the trail in California
As it comes to its end, Route 66 moves through Pasadena along Colorado Boulevard, a street made famous by the annual New Year's Day Rose Parade. you see savvy shopping areas including Rodeo Drive on the left. Coming up, again as you work your way west on the boulevard, is Century City, where presidents often stay and movies are made. For a striking departure, look to your right in West LA to note the welcoming angel Moroni, on the Los Angeles Temple of the Church of Jesus Christ of Latter Day Saints. Generous green lawns lead up to the temple that was dedicated in 1956, now second in size only to the Utah temple. Behind the landmark structure, you can find the Los Angeles Regional Family History Center. This genealogist's delight is open to the public at no charge. Although it eventually ended at Lincoln Boulevard, if there was a "finish line" to this famous drive, the Santa Monica Pier could provide it with the appropriate flair. The famed amusement pier is visible from the Route 66 marker in Palisades Park and worth the trip. Santa Monica Pier opened on California's Admission Day, September 9, 1909. Thousands of visitors celebrated by strolling onto the amazing wooden thoroughfare over the Pacific. The novel walk over crashing waves was seasoned by the sounds of band concerts. For the athletic types, one could "peer" at the swimming races.

By 1916, Charles Looff, who built Coney Island's first carousel, began construction on the landmark Hippodrome building alongside the municipal pier. His architectural fantasy pier housed a string of vintage merry-go-rounds, Wurlitzer organs and thrill rides. As the pier fl ourished, it also grew in size. In 1926, the year Route 66 began, an ornate La Monica Ballroom opened to host dancers and eventually to national radio and television broadcasts. Stormy weather and heavy use took its toll on the fun zones. The roller coaster was eliminated in 1930, but La Monica Ballroom survived another 33 years. The municipal pier continued its operation under by the city of Santa Monica, while the Looff Pleasure Pier suffered from a string of private ownerships until the city took it over in 1953. In 1973, the city mandated demolition. Today, because of the movement by locals to save the pier, visitors can take another ride back through time on a glorious carousel and revisit childhood dreams with their families. The carousel and hippodrome are protected as a National Historic Landmark. The pier is a perfect end to a journey along Route 66…music, Maestro…