With their accrued longevity Foreplay has quite a “book” of tunes to pick from when they perform. James commented, “Initially we only played Foreplay tunes, but now we do my “Westchester Ladies” and some other ones. We always get pretty excited about playing the Playboy Jazz Festival and the Hollywood Bowl. It’s pretty challenging, because it’s so large with people in the back almost a half mile away. And then its history is like Carnegie Hall and other great venues. This will be our fourth or fifth appearance there and we’ll probably focus on the new CD.”
The Pete Escovedo Orchestra relocated from the San Francisco Bay Area in 2001 where they were an institution and quickly developed a similar following in Southern California. In fact, it seems like they are on the PJF lineup almost every year. “I know it seems like that to me also,” Escovedo chuckled from his San Fernando Valley home. “It’s always great to go back there and play. It’s a cool festival, a wonderful place to play and we always look forward to it, so I'm excited!" His very appealing 11-piece orchestra has a signature Afro-Cuban sound that is heavily influenced by timbale dynamo, Tito Puente and all the other great Cuban and Puerto Rican musicians.
The master timbale player/vocalist/band leader recalled that the first time his ensemble was featured at PJF was while they were still in Northern California. There, Escovedo, 80 was involved in and witnessed unbelievable and historic music development. He remembers vibraphonist Cal Tjader experimenting in the late ‘50s, playing in the Chico Ochoa Orchestra, doing gigs with his brothers Phil-bass and Coke-timbales for their own Escovedo Brothers Latin Sextet and also working with percussion legends Armando Peraza and Mongo Santamaria. Added to the excitement was the tumultuous psychedelic ‘60s and ‘70s. It included Latin rock fusion big band Azteca that bulged with 23 musicians at one point, formed by his brother Coke, who passed away in 1986. Significantly, the group was his daughter Sheila, then a teenager, first professional gig.
“There were a lot of bands and they went full circle with different styles,” Escovedo recalled. “We had rock bands like the Grateful Dead, It’s a Beautiful Day and of course the Latin rock thing with Santana (he and Coke were original band members for three years), and then we had Tower of Power and Sly and The Family Stone. We would go to each other’s engagements, and sometimes the rehearsals just to hang out. There was a real close bond between all the musicians that live in the Bay Area because everybody is pretty much close by.”
The same kind of closeness is evidenced when the patriarch performs with his family, percussionists Juan and Peter Michael and drummer/percussionist Sheila, aka Sheila E who often are part of his orchestra. “That’s a good thing because they work cheap,” Escovedo laughed. “They’re really something and it’s great to have them with me. They all have their separate things that they do (Peter Michael-Musical Director/producer/solo artist, Juan-solo artist/sideman and Sheila-solo artist/producer/philanthropist) and their kind of music that they play for a living. But when we get together it’s so much fun and enjoyable for me to watch them perform. There’s a song that we do where I walk off stage and let them do their thing and man, they just take it to another level—it’s so fun watch that! Like any father the greatest blessing you can have is your kids following right behind you and do well and doing bigger and better things. ” 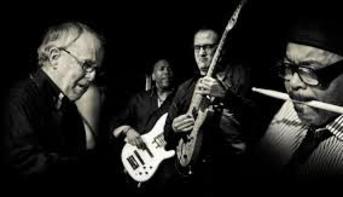 The Playboy Jazz Festival, presently celebrating its 38th year unofficially marks the beginning of summer in Southern California. Attracting about 20,000 people per day the festival is the largest jazz event in the area and possibly throughout the state.
The mixture of up and coming, along with veteran artists spanning jazz, blues, world, Latin jazz and even pop presents essentially something for anyone with an inkling of interest in jazz.
Seasoned musicians Bob James of Foreplay and Pete Escovedo who leads his own orchestra with his offspring, Juan, Peter Michael and Sheila E. are among the most popular groups on this year’s roster. James celebrating the 25th anniversary of Foreplay with their latest CD Silver commented from his home in Michigan. “We weren’t sure that any of us or the group would last that long, and thought of it as being temporary.”
Each of the band members are also solo performers and play in or lead other groups.  “The main thing,” James continued,  “I like about the band, besides the music we’ve produced is that I’m not the leader and everyone is equal. That generally works well, but occasionally we’ll have a glitch and our manager will have to cast the deciding vote or we’ll just hash it out.”

Mason similarly has collaborated with keyboard wiz Chick Corea, trumpeter Donald Byrd, The Becker Brothers (Michael sax and Randy trumpet), guitarists Lee Ritenour and George Benson, and was a member of Herbier Hancock's influential Headhunters band. While Nathan East on bass and vocals injects strains of pop, R&B and funk due to his longstanding ties with rock guitar legend, Eric Clapton, in addition to working with icons Michael Jackson, George Harrison, Phil Collins and Stevie Wonder.
Guitarist, Chuck Loeb the newest addition to the band has been with them for five years and three CDs. “Chuck has serious mainstream cred from working with Stan Getz, Chico Hamilton and Hubert Laws,” James cited. Loeb additionally played in the groundbreaking fusion group Steps Ahead with vibraphonist Mike Mainieri and saxophonist Michael Becker. “He also tends to write the most complicated numbers of all of us and has adapted well, playing the parts of our previous guitarists, Lee Ritenour and Larry Carlton.