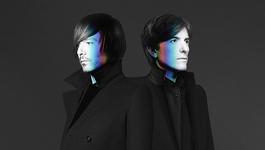 Similar to Arlo Guthrie and Roseanne Cash, singer/songwriter Eliza Gilkyson grew up with a well-established performer and writer father. Additionally, her brother Tony is of the same ilk, along with grandmother Phoebe who wrote poetry and dabbled in songwriting. At McCabe’s in Santa Monica to a sold-out audience guitarist, Nina Gerber, backed her. Gilkyson loosely explained her new recording Secularia as being, “spiritual music that an atheist could handle.”

New song “Instrument” featured her playing piano and singing solemnly, while insightful “Through The Looking Glass,” written by Gilkyson’s grandmother in 1949 was her father, Terry’s Armed Forces Radio theme. Continuing, her father and grandmother’s “Solitary Singer” was showcased with rangy electric guitar, along with “Conservation” her grandmother’s poetic burial instructions. The notion of God being male was explored   “In The Name of the Lord” and embellished by scorching hard rocking guitar to garner hearty applause.

For variety country styled “Death in Arkansas” by her brother was performed. To brighten things up she went back to 1994 for sweetly sung “Roses at the End of Time.” Concluding the engaging set was her father’s “Fast Freight” with wailing guitar and  lyrics rearranged to a woman’s perspective that received an enthusiastic standing ovation.

Classic folk-rock fans know all too well about singer/musicians Judy Collins, 78 and 72 year-old Steven Stills’ torrid two-year relationship that begin in 1967. It was the impetus for the immortal Crosby, Stills and Nash song “Suite: Judy Blue Eyes.” The former lovers maintained a strong friendship and 10 years ago talked about taking it to another level. Through Collins’ manager’s efforts that became a reality and in late July they embarked on a 45-city tour coinciding with new recording, Everybody Knows. It’s their rendition of Leonard Cohen’s 1988 wry social commentary (easily applicable to present times) to be released Sept. 22.

Collins recorded Cohen’s “Suzanne” and “Bird on a Wire” in the mid ‘60s when he was a struggling poet and songwriter, encouraged him to sing his own songs and continued covering his songs, including a whole album in 2004. She and many other artists’ reworking of Cohen’s selections, along with his own recordings propelled him to heights second only to Dylan in terms of far-reaching influence that continues after his death last year. Besides Cohen’s song, Collins and Stills include an original, and songs by Dylan and Sandy Denny. They will be at the Saban Theatre September 1st.

King Crimson, “granddaddy of progressive rock” performed at Los Angeles’ Greek Theatre for its Radical Action Tour 2017. After 47 years of continual personnel changes the virtuoso cult band has former members in many successive Brit prog bands. Despite the turmoil bandleader/guitarist/Mellotron player Robert Fripp, who retired briefly to form a guitar study school, has magnificently kept it together. Numerous studio and live recordings, with intermittent tours has kept very loyal fans happy. They gleefully sported vintage and new King Crimson t-shirts in anticipation of the concert. In typical Crimson fashion two sets were needed to cover the expansive catalogue. For insurance Fripp enlisted life-band members guitarist/vocalist Jakko Jakszyk, bassist Tony Levin, saxophonist Mel Collins, and drummers Gavin Harrison, Pat Mastelotto and Jeremy Stacey, along with Bill Rieflin-guitar/bass/drums/keyboards. In action they were quite robust, raucous and jamming away for “Pictures of a City,” “Red,” “Larks' Tongues in Aspic, Part One,” “Easy Money” “Indiscipline” and “Starless.” For added depth obscure, classical themed songs “Cirkus,” “Lizard” and “Islands” were included. An over the top standing ovation wrought David Bowie’s "Heroes" (Fripp played on the recording) along with KC debut album classics “The Court of the Crimson King” and “21st Century Schizoid Man.” 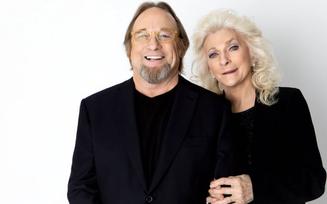 at the Saban Theater 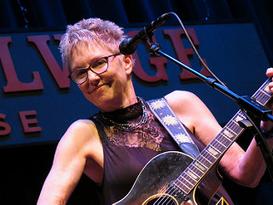 Brit classic rockers Eric Burdon and The Animals (not the originals), wasn’t trying to conceal his age during a Santa Monica Pier Twilight Concert. His eternal Latin-tinged party song “Spill The Wine” released in 1970 with War roused the burgeoning crowd. Foghorn-like sax set off prophetic “When I Was Young” ironically recorded 50 years ago and kept the beach comers’ spirits high. Not to be forgotten was “Monterey” Burdon’s top-selling remembrance of the legendary Monterey Pop Festival that occurred the same year with a celebratory follow-up held in June this year. The blues-rocking Englishman, a longtime California resident, joked about being at both festivals and people asking him to compare them. Focused back on the pier concert he did a “hit parade” of Animals’ songs such as “Don’t Bring Me Down,” “It’s My Life,” “We Gotta Get Out of This Place” and immortal  “The House of The Rising Sun” with the audience singing along. Burdon also tastefully injected a bluesy version of Randy Newman’s “Mama Told Me Not to Come,” New Orleans R&B styled “The Bo Diddley Special” and Leadbelly’s “In The Pines” featuring keyboards. Opening the concert were Arms Akimbo and Mr. Elevator. For upcoming concerts go to: http://santamonicapier.org/twilightconcerts. 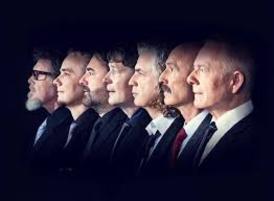 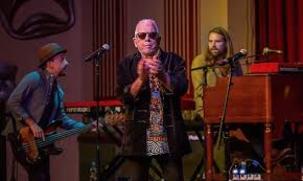 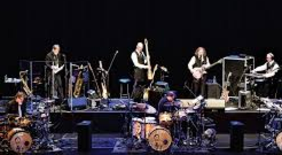