June is the month for graduations, Fathers Day, weddings, and for jazz and blues lovers-it's The Playboy Jazz Festival. Significantly, its lineup has variations of jazz for hardcore and knowledgeable aficionados. Yet, the festival is also balanced with funk, R&B, world music and lighter fare for those new to jazz, and/or people who come more for the occasion rather than the music. Either way, anyone attending can’t help but be moved by the incredible artistry taking place at the legendary Hollywood Bowl during the second weekend in June.

Weiss presently a member of the hard-driving Cookers band worked with Hubbard during the last eight years of his life. He has participated in several other tribute/celebrations for his former bandleader and also for other iconic trumpeters such as Clifford Brown and Lee Morgan. “We’ve always done them in New York, either at Birdland or the Iridium. Usually they’re a weeklong for whatever year it is, 70th birthday, 75th … For Freddie’s 70th I did the shows with him in the Bay Area and at Catalina’s in Hollywood. His chops were diminished a bit, but it was a good presentation and a young band played his music well,” the trumpeter recalled. He was at the JFK Airport in New York prior to a London flight, part of a 10-day tour in Europe with the Cookers.

Upon returning to the U.S. the trumpeter will perform in the SF Bay Area with his own sextet and also will be part of The Healdsburg Jazz Festival All-Stars prior to the Southern California engagement. Regarding the PBJ set Weiss explained how the group selected from Hubbard’s catalogue. “Through group email we all came to consensus of what we wanted to do. We picked the obvious ones like ‘Red Clay’ and ‘Birdlike,’ also ‘D Minor Mint’ from a Blue Note record called Breaking Point and ‘Up Comes Spring’ another big hit of his. So for 45 minutes, that’s probably what we’ll play, maybe eight or nine tunes. But we don’t really want to predetermine that much of what’s going to happen. So you have a little rehearsal, and you see where the magic is and you lean to that.”

Besides being a phenomenal trumpet player Hubbard was a very articulate and sweet sounding flugelhorn player. Weiss who described himself as being a “compassionate ring leader” wasn’t sure if there would be time to include the instrument and he wasn’t going to demand anyone play it. At the same time, he felt that if any of the trumpeters were going to play flugelhorn it probably would be Brecker, who is one the most versatile of all the trumpeters.

Needless to say, the tribute horn players were greatly influenced and impacted by Hubbard, who along with Miles Davis, Lee Morgan and Clifford Brown is considered one of the most important trumpeters in jazz. “Of course, he was one of the most natural talents we’ve ever seen,” Weiss commented. “But he worked hard, really hard and he expected that of everyone. There were stories about him kicking guys off the stage and riding them to do things a certain way—but in his way he was right. In his later years he was lot more tolerant and I wished he had been tougher to motivate the guys more.

“{Contrarily} he was a joker and was funny as hell. I got to know him pretty well. He had a heart and cared about the people around him,  and also about jazz and how it was presented in the world, especially his music.” Concluding, Weiss summed up Hubbard’s
artistry, “He could play the most complex thing in the world, but he could also have an audience in the palm of hand, like a festival with 10 to 20 thousand people. It’s a different process now and Freddie Hubbard defined the ‘golden era’ of jazz through his
compositions, playing and presence.  He had the sound and could play anything from bebop to free jazz and {even top-selling mainstream}.” Unquestionably, Hubbard who used to live in the hills above the Hollywood Bowl will be looking down to see former
sideman and protégé playing his music. 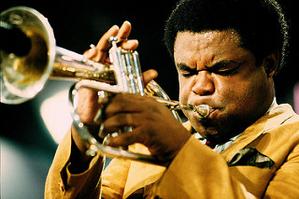 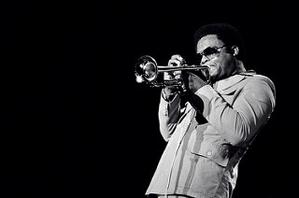 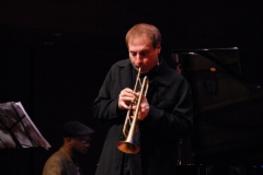